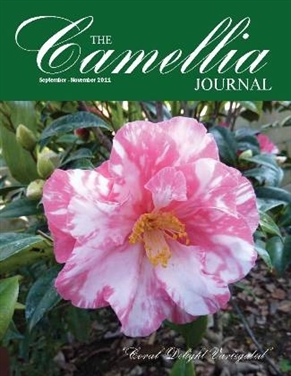 The Tints and Hues of Lavender Camellias

With break through colors and new shades and tones, the coral and lavender camellias add to the beauty of the garden and make good exhibition entries. By Bradford King

The more you see camellias and ponder their origin the more mysteries one discovers. By Bradford King. Part of the FUN of Growing Camellias. “Gib” increases flower size and shape, but most of all, it allows flowers to open early. By Mark Crawford

You don’t have to have a large garden to grow camellias, you can grow them in pots. Bradford King provides the details.

The new camellia society had its first show with more than 1,000 attendees. By Sam Wellborn

The history of a camellia that found its way through England to America. By Bradford King.

A True Camellia Giant on the Trail of a New Cultivar

Dr. Frank Wilson may be in his 80’s, but age doesn’t stop him from the pursuit of new camellia introductions. By Mickey Moore

Keeping the Hammer Down

ACS President Matt Hunter tells about the gradual improvements at ACS and the work of Sam Wellborn, who is steaming along in the Chattahoochee Valley area.

The Convention in Norfolk March 21-25, 2012 will be fun filled and great camellia learning experiences are planned.

January 30 - February 3, 2013 are the dates and the Napa Valley Camellia Society is making plans now.

Please support the nurseries and businesses that advertise in the ACS Camellia Journal.